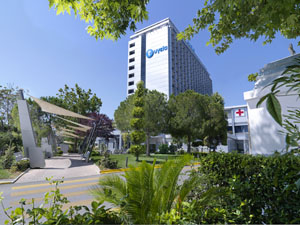 HYGEIA Hospital is the first large Private Hospital that has operated in Greece since 1974, and is currently one of the largest private hospital units in our country.

It was founded in 1970 by a group of Greek physicians; their aim was creating a model hospital in Greece. HYGEIA Hospital has gradually alleviated the shortcomings of the Greek National Health System. HYGEIA Hospital throughout its thirty-plus years of operation continues to lead the way; its main objective is the provision of high quality services and the development of an integrated network of Health services in Greece and abroad.

HYGEIA was the first hospital in Greece to undertake a heart transplant operation, the first to treat an HIV patient, and the first throughout Europe to carry out implantation of radioactive particles in prostate cancer. In addition, the successful separation of Siamese twins in May 1989 provided two people with an independent personal life.

HYGEIA Hospital offers among others:

Hygeia’s Hospital's primary goal remains the provision of high quality services at the cutting edge of medical science and technology, as well as the development of an integrated network of Health Services both in Greece and abroad. This is demonstrated by its decision to join forces with MITERA and LΕTO, by a series of major strategic investment initiatives in Greece, Cyprus and South-eastern Europe, and also by fostering the agreement to construct the first private hospital of Albania (Hygeia Hospital Tirana).